What is the Difference Between Ham Hocks and Pork Shanks? 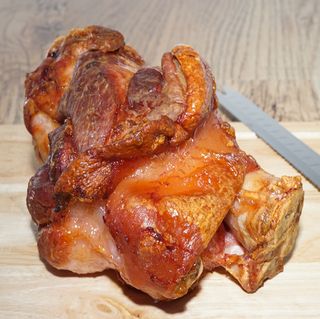 If you’ve ever wondered “Can I substitute ham hock for pork shank in recipes?” or “What is the difference between ham hock and pork shank?” then you’ve come to the right place. To answer these questions, you need to know what exactly a ham hock is, how to cook them, and other information.

Can I substitute pork shank for ham hock?

The ham hock is the lower portion of a pig’s leg. It is best cooked over low heat, ensuring moist meat with plenty of flavor. There are many ways to use the ham hock, but braised shanks are among the most popular.

If you want to make a ham hock substitution, you should first decide on which type of meat you’d like to use. Ham hocks are usually smoked, but there are alternatives. Instead of ham hocks, you can try bacon, pancetta, guanciale, or pig trotter. Pork shanks are also a good substitute for ham hocks.

Ham hocks and pork shanks are both meaty cuts of pork, but their flavor and texture differ. Although they add similar flavor to dishes, ham hocks have much less meat than pork shanks. Ham hocks are also less expensive than pork shanks. Pork shanks contain more collagen and fat and are commonly used for soups and stews.

What are pork shanks?

Pork shanks are a versatile cut of meat. They can be made into many different dishes and are traditionally served with mashed potatoes. They’re often smoked or braised. A delicious way to enjoy pork shank is with a hearty green chile sauce and smashed black beans. Girls Can Grill’s Christie shows us how to make this dish.

Pork shanks are a fantastic cut of meat that is inexpensive and easy to cook. The meat is rich and meaty, with a crispy skin. They’re also leaner than other cuts of pork. You’ll want to use kosher salt and freshly ground black pepper when you cook pork shanks. To cook the cut of meat, place it in a heavy stock pot and add three tablespoons of vegetable oil.

If you’re going to cook pork shanks in a pot, you need to make sure you cook them in batches. You should try to cook them until they are golden brown and crispy. You should also avoid lifting the meat before it’s fully cooked. Otherwise, the meat will shrink while braising.

What can I substitute for pork shank?

If you are wondering what to substitute for pork shank, there are several options. You can use beef short ribs or lamb shanks. They are both similar in texture and taste. Ham hocks can also be used in a recipe. Generally, a pork shank will yield the most flavor.

The pork shank is often seasoned liberally with herbs and spices. It can be roasted on a spit in an oven. However, you can also use a regular roasting pan. The main idea of slow roasting is to let the heat penetrate the meat. It is also recommended to baste the meat regularly to keep it moist and tender.

What’s another name for ham hock?

The ham hock is a cut of pork that comes from the leg of a pig. They are a cheaper alternative to smoked pork products. The connective tissue in the hock melts and adds a delicious flavor to the meat. The ham hock is often served with sauerkraut or mashed potatoes. Some people even serve it with red cabbage or gravy.

Ham hocks are used in many recipes because of their rich pork flavor. They can be roasted, braised, and stewed. Regardless of their cooking method, ham hocks are an essential ingredient for many traditional southern dishes. They also add meaty flavor to broth and other ingredients.

Ham hocks are a cheap cut of meat that comes from the lower part of a pig’s leg. They are largely made up of fat, connective tissue, and muscle and should be simmered for hours to become tender and delicious. However, don’t mistake them for shanks or trotters. Ham hocks are most commonly used for flavoring dishes. Although they are unappetizing on their own, the meat is incredibly rich in flavor and is a good addition to a variety of dishes.

If you are a meat lover, you have probably tried various types of ham and pork. It is one of the most popular types of meat and it has a distinct flavor. But deciding which to buy can be a challenge. To help you make the best decision, we’ve made a comparison of the two.

Both ham hocks and pork shanks have their own merits. For starters, both are great for making broth or soup stock. They are also relatively inexpensive. They are also similar in flavor and texture. While ham hocks have a milder flavor, pork shanks tend to have a more meaty texture and a deeper flavor.

Although both cuts are good for cooking, you may not want to choose ham hocks over pork shanks unless you’re looking for a cheaper, meaty cut. While the meat in pork hocks tends to be smaller, they are full of gelatin and collagen, and make for an excellent meat alternative in many recipes. They also take longer to cook than their counterparts, so plan accordingly.

What are ham shanks good for?

Despite their name, ham shanks don’t have the typical meat texture of a ham hock. Instead, they’re a combination of collagen and fat. This combination gives the meat a delicious flavor and tender texture. If you cook them well, the meat should be tender and easily shreds apart.

Ham shanks can also be used in cooking soups and stews. They are cut from the bottom of the pig’s leg. This portion contains the most collagen and fat, but it can also contain meat. They’re a great source of umami and are ideal for stocks, broths, and sauces. You can use ham shanks in many different dishes, so you might as well learn what they’re good for.

Ham hocks are available at your local grocery store. They’re usually smoked, but you can find them on the counter or in the packaged meat aisle. You’ll find them inexpensive and tasty, and they can also be substituted for pork shank or bacon.

If you’ve ever wondered, “Are pork shanks good?” the answer is a resounding “Yes!” These meaty pieces of pork are great for braising and making a tasty meal. To prepare them, begin by placing a large Dutch oven over medium heat. Add a small amount of oil to the bottom of the pot. Then, coat the shanks with flour. Care should be taken not to crowd them in the pan; you want them to cook evenly. Once you’ve reached a desired level of tenderness, remove them from the pan and cover them with aluminum foil.

While pork shanks can be found in most grocery stores, the best place to purchase them is from a meat market or butcher. This way, you know that they are fresh. However, if you don’t have a butcher in your area, you can order them online. There are many ways to buy pork shanks and it’s best to know what works for you.

Pork shanks are a type of ham that is rich in protein and flavor. They are also commonly referred to as “pork rinds,” “pork shoulders,” and “ham hocks.” They are a tough cut, but they can be tender when cooked. The meat typically has a red or orange color.

To cook pork shanks, start by brining them in a large non-reactive pot. Add salt, sugar, coriander, peppercorns, rosemary, bay leaf, and garlic. Heat the brine to 35 degrees F. When the brine is ready, add the shanks and let them sit in the brine for eight to 12 hours. Once they are tender, remove them and place them on a baking sheet lined with a clean kitchen towel.

Pork shanks are often underutilized cuts of meat, but if prepared properly, they can be succulent and tasty. Searing pork shanks will help seal in the flavor and render the fat. When cooked this way, the fat slowly cooks the meat, making it tender and flavorful.